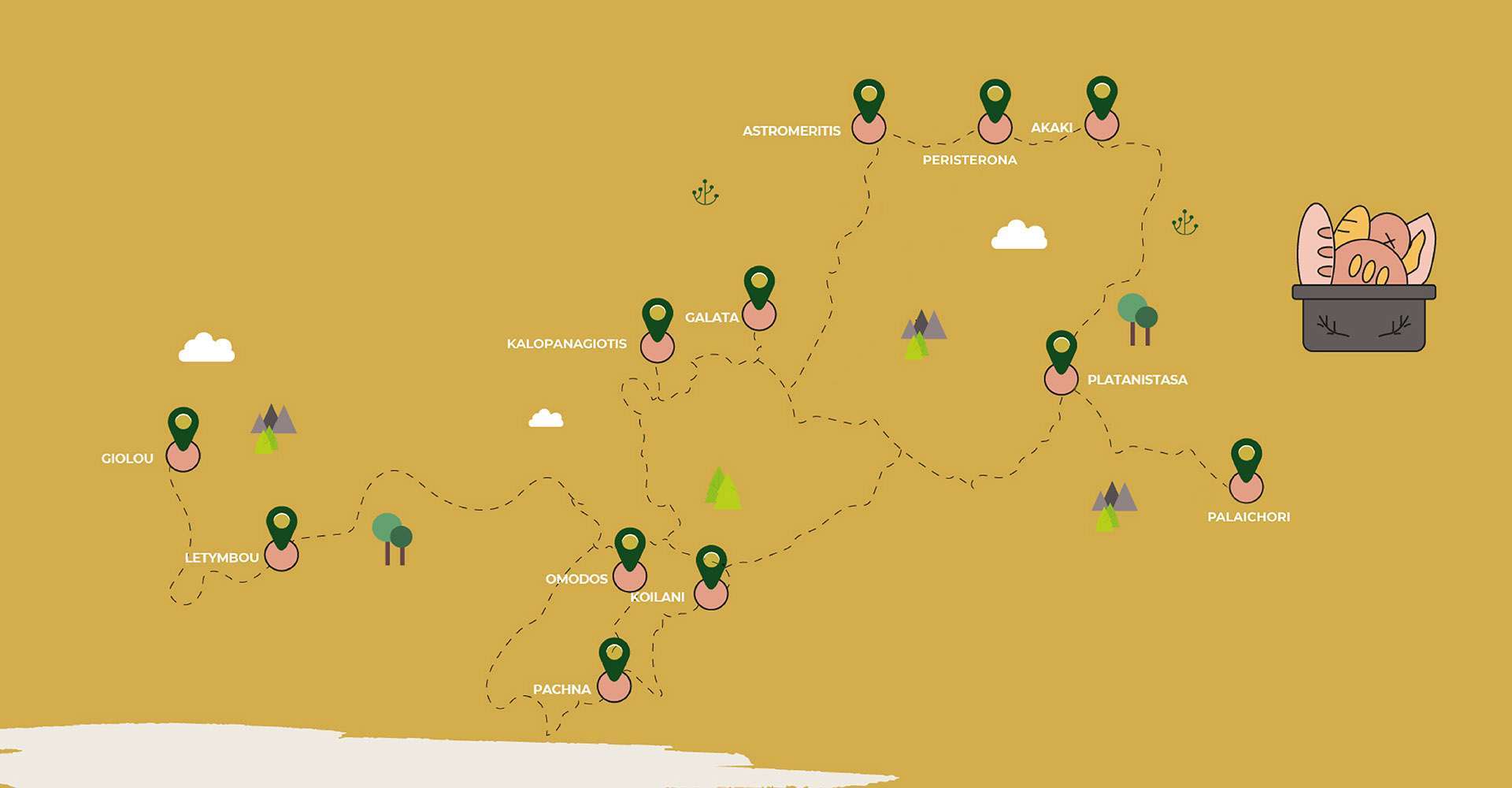 Bread for the soul

Since ancient times, bread has occupied a prominent place in our daily lives, not only as a main food stable, but also as having an important role in religious rituals and ceremonies and other life celebrations. The excellent quality of Cypriot wheat provided the perfect basis for bread making. It is the food we turn to in our finest and darkest hours and its history dates back thousands of years.

With time, embellishment of the common bread loaf resulted to finely decorated loaves. Much like all things that are aesthetically pleasing, decorated bread loaves had a great appeal to Cypriot women, who imagined a myriad of occasions and celebrations to create and show off their artisan creations. It started with beautifully decorated loaves created as offerings to God, as tokens of Christian faith and gratitude. This symbolic gesture was encouraged by the numerous references of bread in the bible. In our folk tradition, bread symbolizes the body of Christ. Bread was offered at not only ceremonies and joyous events such as births and christenings, but also as a piece of tangible consolation (gr pariorka) at funerals. Today, we carry on this tradition and a small piece of bread is offered after the burial to mourning guests.

The symbolic and sacred value of decorated bread was also evident at weddings where a bun decorated with a dough cross was hung as decoration on a wall in the couple’s room to protect and bless the newlyweds. Interestingly, two snakes made of dough and blackened with smoke were placed to the right and left of the cross, to protect the couple from ill wishing. The sanctity of bread is evident also during the kneading process. Housewives will mark the dough with a cross several times during kneading and will pray for a successful outcome.

On our island the symbolism of bread and decorative style varied from one place to another and there was no limit to the imagination of its housewives, who did their best to make each bread look like a mesmerizing work of art. Traditional baked goods were a delight to the eyes as much as to the taste buds and were associated with many customs, beliefs and prejudices in our traditional way of life. Bread was ceremonial, ritualistic and joyful to make and was an occasion for the whole neighborhood to get together to help each other knead, decorate, fire-up the oven, bake and share stories.

From birth to death, bread in its spiritual core, symbolizes the never-ending circle of life, manifesting the desire for fertility, abundant crops, family prosperity and all things good. On our island, bread goes beyond its nutritional value and shall forever be a living part of our tradition. 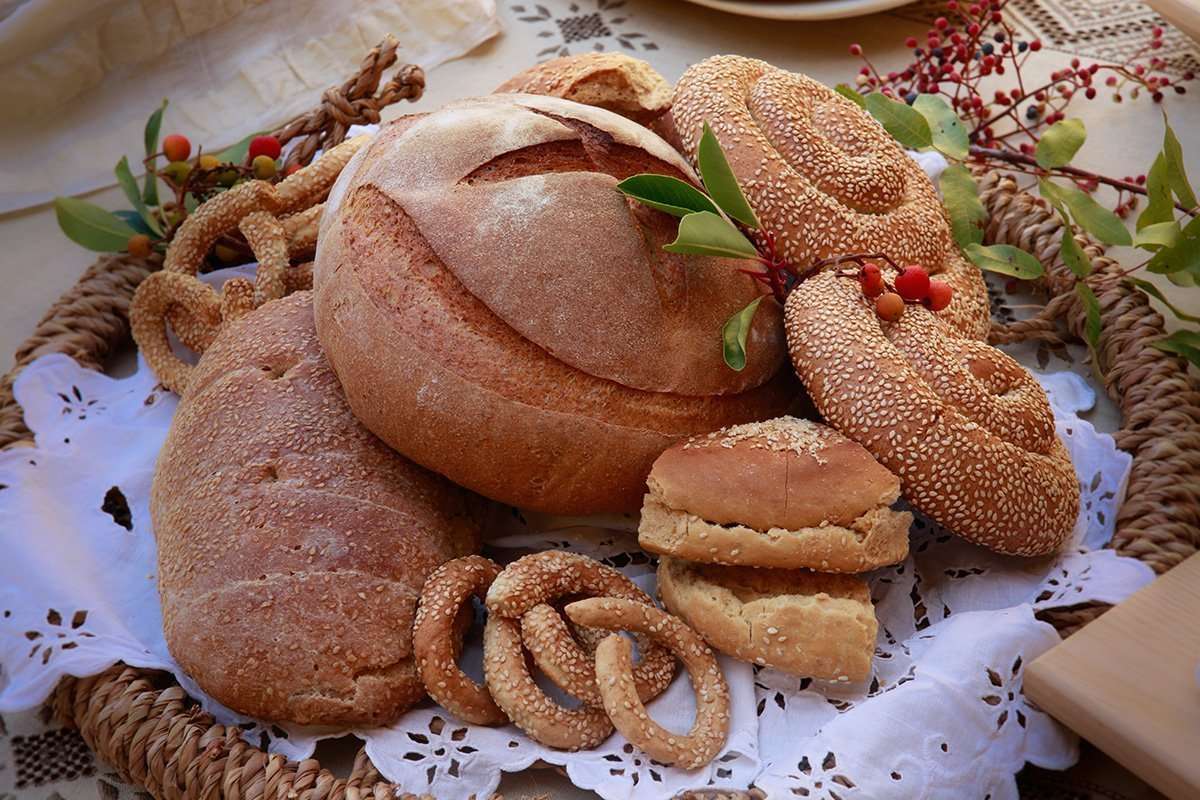 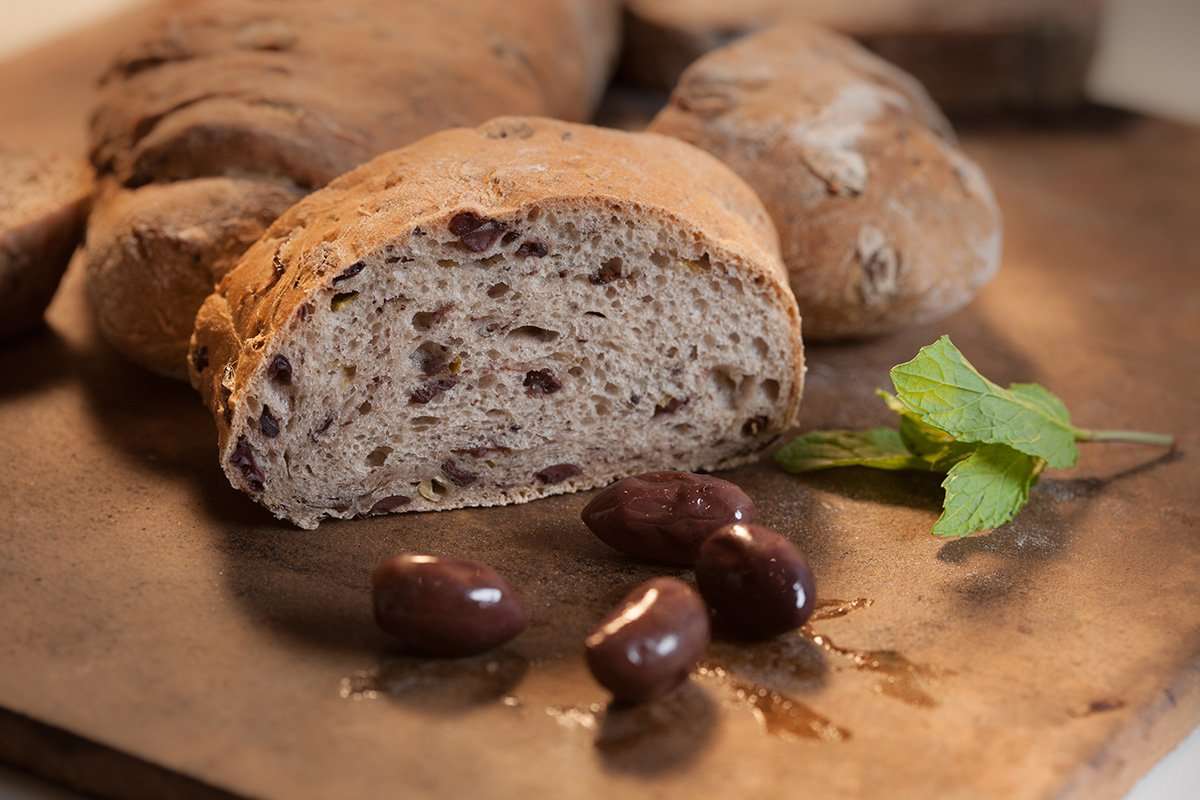 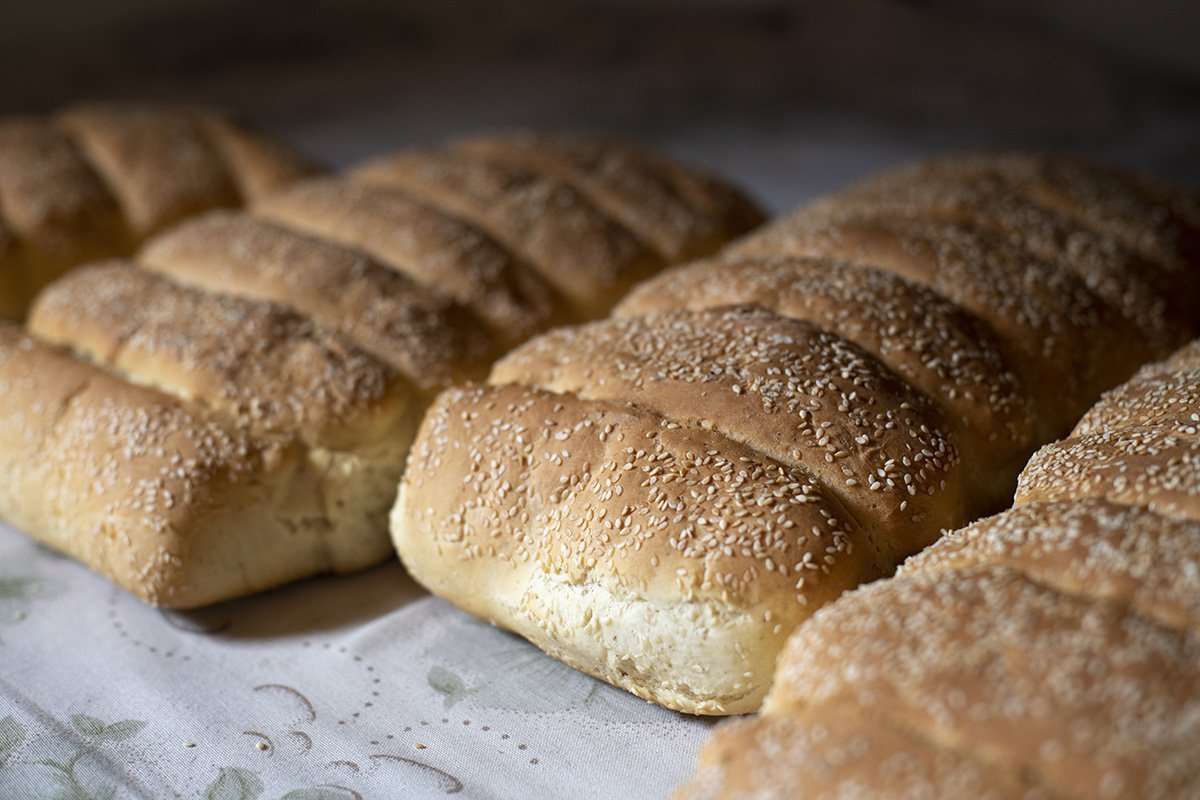 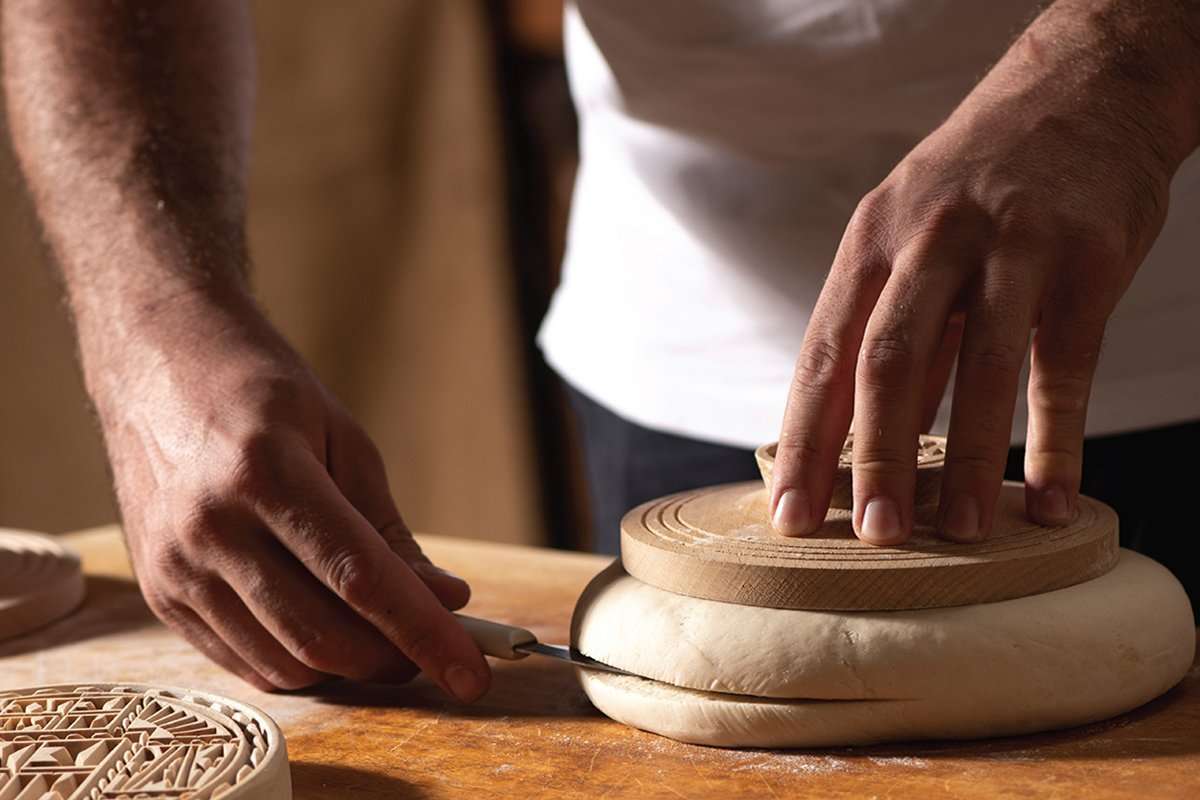 This route offers visitors the opportunity to get acquainted with our bread making traditions, taste traditional bakeries and even participate in making bread or other products made out of flour. At the traditional bakeries found along this route, pastries are prepared daily such as koumoulies Koumoulia is a traditional aromatic bread. It is also called Daktilia (Fingers) because the loaves are long and slashed on topped, resembling fat fingers. The loaves are flavoured with mastic gum, mahlepi and aniseed. The bread is topped with a mixture of seeds (sesame, nigella and aniseed). , flaounes Flaounes are traditionally prepared for Easter and is a cheese-filled pastry, which may include raisins or be garnished with sesame seeds. The main cheese is a special type of cheese that is prepared around Easter time and is mixed with anari and halloumi cheese. Ground mahlepi (a Greek spice made from the ground stone of the St Lucie cherry) is added in the dough, giving a hint of almond flavour. , elliopittes, tiropittes, kolokotes, glystarkes, glytzista, tremithopittes, as well as other flour products such as sklinitzi it is a kind of reed and is used both for forming the traditional pasta with the same name and for making baskets (wickerwork). Sklinitzi grows along ravines or salt marshes and is harvested mainly in the summer. pasta, a registered as Protected Geographical Indication product.

If you visit us during Christmas, New Year’s or Easter holidays, you will be able to taste special pies traditionally baked only on these occasions. Housewives decorated these pies with a cross, human figures or various animals. At Christmas, they hang the stavrokoulouro (bread roll with a cross in the middle) on a wall and left it there until May, because according to a popular superstition it would protect the residents of the house from being bitten by a donkey. Although, this is a long forgotten tradition, we still bake Vasilopita on New Year’s Eve to welcome the New Year and hide a coin in it. Whoever finds the coin in his piece of pie will enjoy a blissful year ahead, blessed with luck and prosperity.

Watermills played an important role to flour production since ancient times. Built near rivers especially in the mountainous areas, some surviving watermills on this route have been restored and can be visited. Their charming and unique architecture has earned them the title of cultural heritage monuments.

The secret to a delicious traditional bread loaf is the sourdough. Bread making would commence the night before by preparing the sourdough using a small portion of a sourdough culture previously made. Sourdough was prepared with holy water, which contains essences from basil leaves that are used to sprinkle the holy water onto the worshipers (it’s a blessing in the Orthodox Church) and basil helps the bread dough rise. The preparation of sourdough takes about 9 days. The sourdough starter is a live culture made from flour and water which has to be fed each day with equal amount of flour and water for nine consecutive days. In the old days only the Holy Water from the blessing on September the 14th was used, as it is the day the Orthodox Church celebrates the discovery of the Holly Cross (the actual Cross that was used to crucify Jesus Christ). The cross was discovered by St. Helena, the mother of the byzantine emperor Constantine the Great. The dough was placed in a wooden basin called Skafi Skafi is a wooden large oblong bowl used for kneading and left overnight to rest and rise. When ready, the dough was kneaded in loaves and each loaf was placed on a long wooden board with round pits (Goupposanido), until the oven was fired and ready for baking.

Many customs and traditions are closely intertwined with a special sweet called ‘Glitzista’, which was offered as a treat from the relatives of a newborn to their midwife, when they visited her after the birth to thank her for her services and to guests at christenings and engagements. Also, a newly engaged girl would offer ‘Glitzista’ to the uncles and aunts of the groom, hoping that the sweetness of the treat would help the girl gain their approval.

Traditional bakeries that are consumed to this day, however, in the old days many of these had a special purpose. Glystarkes, for example were used as wedding invitations. They were placed in baskets and taken around the village to invite fellow villagers to a wedding. The invitation call was made by the couple’s bridesmaid and relatives. In some villages, Glystarkes were simple to make, a bread roll crisscrossed with bands of dough and sprinkled with sesame. Elsewhere they were elaborately decorated with dough flowers, which symbolized innocence, purity and the beauty of the soul.

St. Basil was the Bishop of Kaissaria and once had to collect ransom money to pay an Ottoman general who was threatening to invade the city. People gave up their jewellery and other valuables to be able to gather the necessary amount. The day the ransom was supposed to be paid; St. Basil met with the Ottoman general and presented him with a chest full of money and treasures. The moment the general touched the chest a blinding light enveloped him and he disappeared. The people rejoiced and thanked God for they considered the general’s disappearance as being a divine miracle. St. Basil was now left with a chest full of money and jewellery and no way of knowing what belonged to whom. So he came up with a brilliant and fair idea: he prepared a pie for every inhabitant of the city and inside it he placed a coin or a piece of jewelry. The next day after the mass, he distributed the pies to all the inhabitants of Kaissaria. They were astound to find the exact amount of money and jewellery they had offer inside and ever since a pie is prepared to celebrate the coming of the New Year but also to commemorate St. Basil’s day (1st of January) and the miracle that took place in Kaissaria.

Links to businesses offering the experience along the route 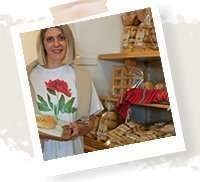 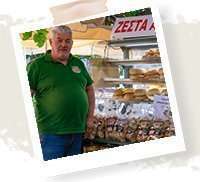 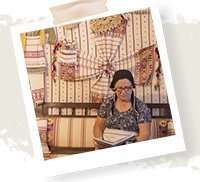 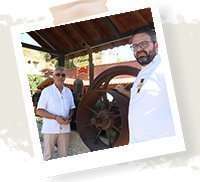 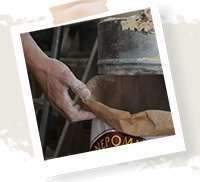 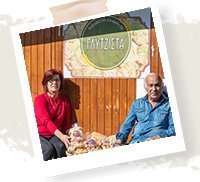 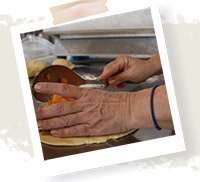 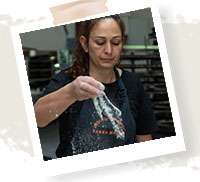 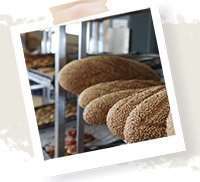 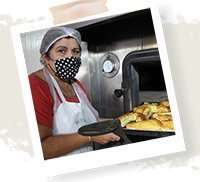 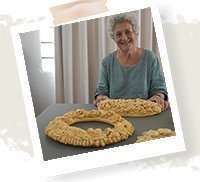 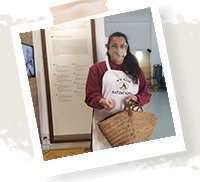 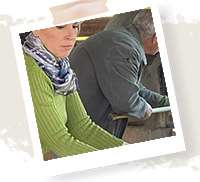 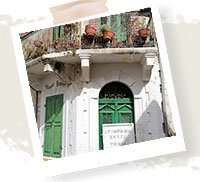 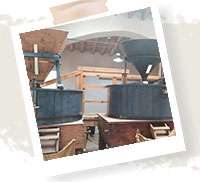 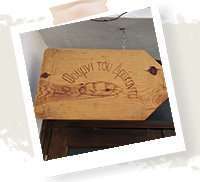 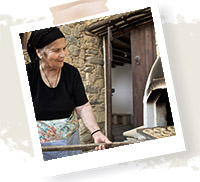 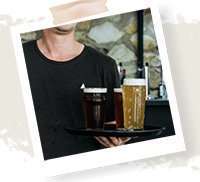 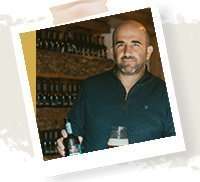 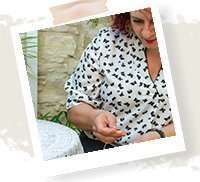 Labeled with “Taste Cyprus” restaurants/taverns nearby: